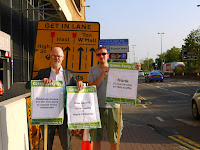 I became interested in Green politics in my teens, originally joining CND and the Green Party (or the Ecology Party as it was then called) in 1983. I have been campaigning hard on many environmental and social issues for most of my life, most recently on air pollution in the centre of Maidstone.

I stood in the 2010 and 2017 General Elections as the Green Party's candidate for Maidstone and the Weald and regularly stand in local government elections, getting 23% in 2012. I have been the party's spokesperson on health and on their Executive as Policy Coordinator. I have been the chair of Kent Greens for the past 10
years.

In my spare time I work in the NHS as a manager and am a qualified nurse.

I am 51, married to Dawn and we have a daughter Poppy, and we live in central Maidstone.