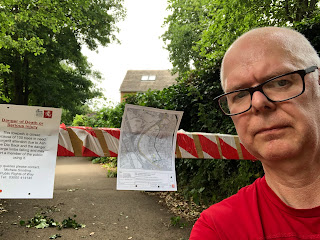 The council's own guidelines also say to avoid removing infected trees. Not sure what they are up to so Steve and I have written!

Further to Mr Cheeseman’s email, I am aware that there are a number of immature trees set back around 50m from the tow path that appear to be dead. There are also a small number of mature ash trees along the tow path of which I have not seen signs of chalara.

Secondly, can you provide me with your plans for the replacement of the dead trees.

In line with your own guidance, it would be wrong to remove the mature trees and given that the immature ones are a long way from the tow path I am unclear why you have felt the need to close it.

Please can you urgently review your plans and intentions for this area.

We have been made aware of KCC’s plans to remove up to 200 trees in woodland along the tow path in Maidstone between the town centre and Allington. KCC have stated that this is due to chalara and a perceived danger to pedestrians.

As a regular user of the path, this area is particularly beautiful and has significant wildlife. There have been no falling trees or branches along this stretch of the river outside of what is normal for woodland.

Your own guidance and that of Forestry England states that ash trees should not be felled and if there is a real danger then branches only should be removed.

I am deeply concerned that your actions underlie a different motive than the stated one, i.e. development of the area.

Please reconsider your management plan for this woodland.